On Pentecost Sunday, I was possessed. On my order of worship, I drew Milo in many hats. I figured they were fun enough to share.

Milo may not have starred in his own strip for a little while, but he never leaves my mind. Indeed, he shows up in doodles pretty frequently; he’s shown up at my work giving instructions, in the margins of church bulletins, and even on hands and fingers. He was recently captured on film, being doodled on the paper placemat at an Indian restaurant, where he is seen enjoying a forkful of saag paneer.

Here’s what Milo would look like on an Ohio Art Pocket Etch-A-Sketch. Not bad, if I do say so myself.

In which Milo plays with his robot toys.

In this specially commissioned strip, Milo shows off his Earthquake Survival Bag, and talks about bolting your house to its foundation.

In which Milo shares his art. He takes his art very seriously.

In which Milo shows off his cactus.

In which Milo tries out some bathroom products. 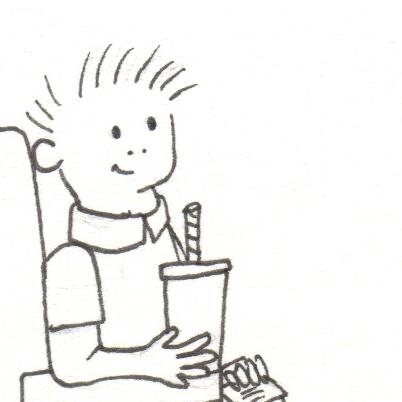